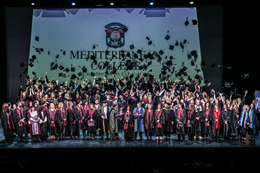 Mediterranean College, the first private College in Greece, welcomed with joy and pride the graduates of the class of 2015 at its 36th Graduation Ceremony. This year’s ceremony titled “Beyond the Boundaries” aimed at highlighting the greatness of people who – by overcoming themselves – went “beyond the boundaries” in social contribution or science.

More than 400 graduates of the class of 2015, 180 of whom University of Derby graduates, had the unique opportunity to experience British higher education in Greece and acquire contemporary knowledge and skills. Graduates from the Schools of Psychology, Education, Business, Computing and Engineering have the privilege to be optimistic, as from this moment they all possess the required skills for a successful career.

In the two impressive events, which followed the ritual of the British Universities, addresses to the graduates were given by the President of Mediterranean College, Professor Sophocles Xinis and the Deputy Vice Chancellor Professor Rod Dubrow- Marshall, representing the collaborating University of Derby.
Keynote speakers were Father Antonios Papanikolaou, initiator and founder of the NGO “Arch of the World” and the internationally acclaimed Brand Strategist Mr. Peter Economides, founder of the company Felix BNI. 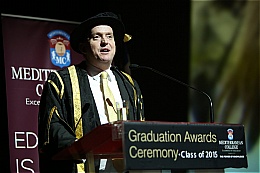 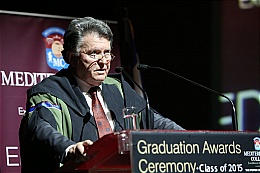 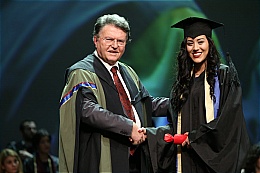 In the context of the ceremonies’ main theme “Beyond the Boundaries”, honorary awards were extended to the NGOs “Medecins Sans Frontieres – Greece”, “MDM – Greece”, “AGKALIA” based in Lesvos, “META-Action” of the UNHCR. Scholarships were awarded to Mediterranean College students based on their academic performance and honorary awards were conferred to students and academic staff of the College, who have excelled in the academic year 2014-15.

The 36th Graduation Ceremony of the Mediterranean College was honored by the presence of leading personalities in Sports, Politics and prominent representatives of the Media. 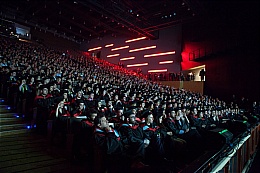 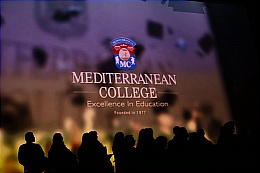 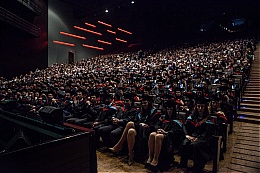