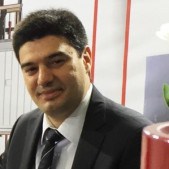 George Gkalaitsis graduated from the department of Mechanical Engineering of the Aristotle University of Thessaloniki (AUTH).
Shortly after his graduation, he started working at  “TECHNHM EPE” at Alexandria Hmathia whose main field of work was industrial refrigeration. After one year, he moved to “DOPPLER AEVE”, at Polykastro Kilkis, where his main field of workwas lift manufacturing. He continued working at DOPPLER for about 10 years at the departments of sales, production and finally RnD. For the past 1 and a half year, he’s been working at the RnD department of “BIOFIAL SA” at Kalochori Thessaloniki. He has attended several seminars and training programmes on sales and technical issues. He has been a member of the Technical Chamber of Greece since 2003.