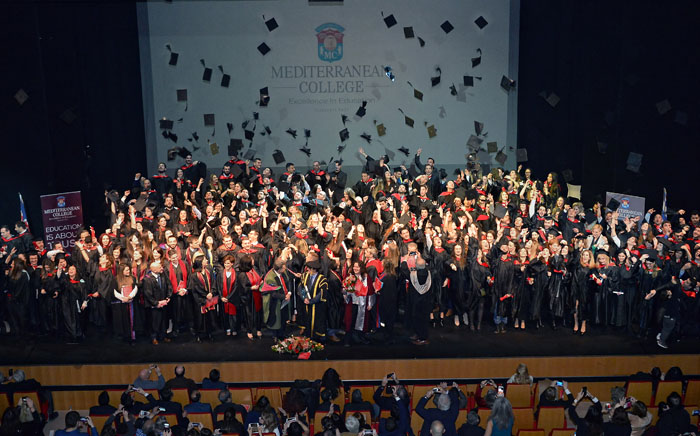 The Mediterranean College Graduation Awards Ceremonies – Class of 2017 were organised in Athens and Thessaloniki on February 26th and March 1st respectively, with this year’s theme to be “Greece in the Epicenter of Academic & Cultural Contribution”.

In the presence of Professor Nikolaos Antonopoulos, Pro Vice Chancellor (Research) of University of Derby (Athens Ceremony) and Mrs Gail Thrippleton, School of Business and Management, UK & International Partnerships Manager of University of Derby (Thessaloniki Ceremony), Mediterranean College and its founder and honorary President, Professor & Author Sophocles Xinis, as well as the members of the Academic Directorate, awarded the students of the Schools of Psychology, Education, Business, Computing, Hospitality and Engineering of Mediterranean College and Mediterranean Professional Studies their Master’s, Bachelor’s, Higher National Diplomas and CPD degrees and diplomas.

Academic scholarships were awarded to the students with excellent academic performance and special awards were given to academic staff and students who stood out during the academic year 2016-17.

In his greeting, the founder of Mediterranean College Professor Sophocles Xinis referred to the four basic criteria – meritocracy, diligence, extroversion and Hellenic spirit-, that will enable the graduates of the class of 2017 to establish and ensure their professional distinction following their graduation.

The Athens Ceremony Keynote speaker, Mr. Yiannis Smaragdis, well-known film Director, referred to the essence of Knowledge and how this knowledge can be applied, in order to overcome any problems and dilemmas in life, and urged the graduates to keep striving to make the difference for themselves and their country.

The Thessaloniki Ceremony Keynote Speaker Dr. Kyriaki Oudantzi, Vice President of the Hellenic Olympic Academy and Director of the Olympic Museum of Thessaloniki, referred to the contribution of the ancient Greek thought into the shaping of Western civilization, as well as to the contribution of Olympism into the creation of the European evolution and the primary solution to the contemporary problems of the cultural crisis.

Distinguished members of the Economy, the State, Sports & Culture honored with their presence the 38th Awards Ceremony of Mediterranean College.

You can watch HERE a video with the highlights of the 38th Graduation Awards Ceremony.