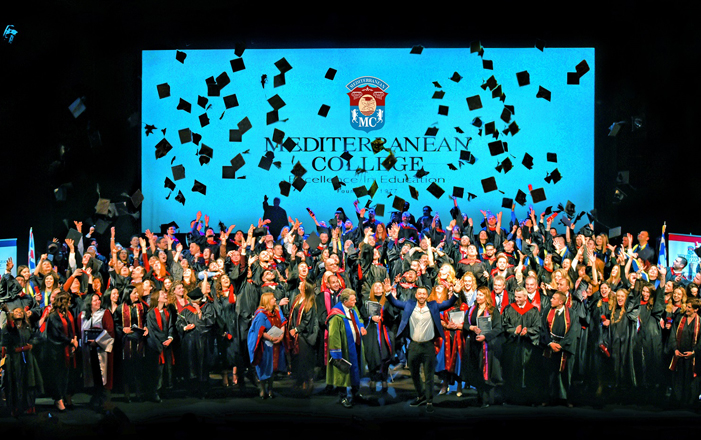 The Mediterranean College (MC) 40th Honorary Graduation Awards Ceremonies – Class of 2019 were organized in Athens, on Monday, February 17, 2020, at the Hellenic Cosmos Theater and in Thessaloniki on Thursday, February 20, 2020, at the Music Concert Hall. Τhis year’s theme was a tribute to our Alumni based on our recent marketing campaign ‘’Redefine Success’’ focusing on how Our Graduates Redefine Success!».

The Athens Ceremony was dedicated to MC former graduates, our “ambassadors” in the Greek & International Market. The Key-Note Speaker of the event was Mr. Konstantinos Koutalis, Manager Data Center IT Infrastructure, Google-Amsterdam, (Mediterranean College Alumnus, Class of 2002). Additionally, three highly successful businessmen and one scientist, shared their “own path to success” . The Athens event was hosted by Mr. Sakis Tanimanidis, a famous TV Presenter.

In the presence of the Founder & Honorary President of the Mediterranean College, Professor Sophocles Xinis and members of the Academic Administration, Bachelor’s, Master’s, Higher National Diplomas and Professional / Executive Diplomas were awarded to 454 graduates from the Schools of Business, Computing, Psychology, Education, Tourism & Hospitality, Engineering, Sports & Health Sciences of the  Mediterranean College and also Mediterranean Professional Studies.

Academic scholarships were awarded to students with excellent academic performance and special awards were given to professors and prominent students of the academic year 2018-19.

In their greetings to the Class of 2019 Graduates:

Key Note Speaker at the 40th Graduation Ceremony in Thessaloniki was Mrs. Maria Tsakali, Head of Education Dpt. of the British Council in Greece (Thessaloniki division) & Honorary Consul of Britain in Thessaloniki.

Distinguished members of the State & Sports also honored with their presence the 40th Graduation Awards Ceremony of Mediterranean College.