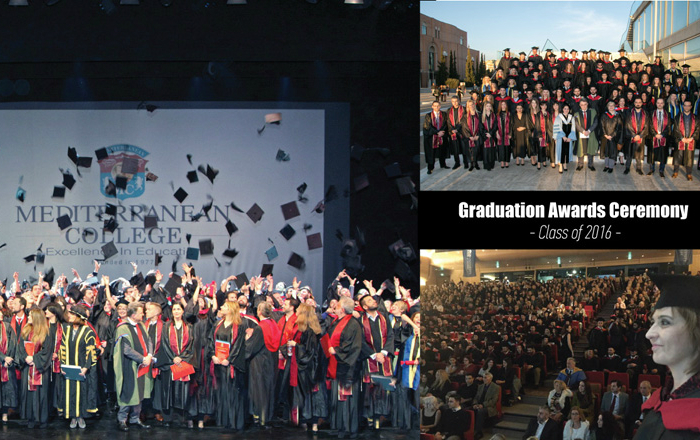 37th Graduation Awards Ceremony: “Education is about values and boldness”. This is the highlight of Mediterranean College’s 40-year dynamic presence in Greece.

“The academic values and the boldness that you felt during your studies at Mediterranean College, I ask you to convey and apply during your professional career … defend and promote your value and the value of your colleagues. Demonstrate your hard work and outward-looking productivity, equivalent to the one you demonstrated as students of Mediterranean College. Wherever your professional path leads you, in Greece or abroad, always retain Greece in your heart and mind…”.

With this moving recommendation the president of Mediterranean College concluded his address to the class of 2016 graduates, during the 37th inspiring Graduation Awards Ceremony of the 1st private College in Greece.

The class of 2016 graduates arrived early at the venue, to wear the distinctive gowns addressed by the ceremony ritual and take the necessary photos. The 37th awards ceremony was dedicated to a 40-year course focused on life aims and values. Aims and values stemming from the core philosophy of Mediterranean College for Excellence in Education. The Athens ceremony was presented by the journalist Stephanos Konstantinidis and was complemented by the Athens Philharmonic Orchestra, who performed the distinctive anthem “Land of Hope and Glory”. An address to the graduates was given by the Vice Chancellor of the University of Derby, Professor Kathryn Mitchell.

“Ethos, Passion, Logic, Knowledge, ‘Filotimo’, Resilience and Madness!”. With this characteristic phrase the keynote speaker of the Athens ceremony, Dr. John Kalogerakis CEO JMK – Anthropocentric Training & Development concluded his speech. Dr. Kalogerakis congratulated the “stars” of the evening, urging them to thank those who have stood by them along their academic journey and apply all the above to change their lives, the world and conquer a well-deserved future!

Keynote speaker of the Thessaloniki ceremony was the Deputy Mayor for Tourism and International Relations of the Municipality of Thessaloniki, Mr Spyros Pengas, who talked about individual and team excellence and the importance of education in a person’s development. “…The European course of the country is a vested fact, it is equivalent to our individual education and knowledge capital that differentiates us, and no matter how hard our politicians have struggled to waste it, it is something that we owe to preserve it, not grant it to anyone and never lose it”, Mr Pengas highlighted.

The Awards Ceremony included the Annual Education Awards, which were first established by Mediterranean College in 2013, while the Academic Committee of the College granted an honorary award to the author and philologist Mrs Sofia Nikolaidou and special commendations to the College external partners, Soilab Geodomi – Maragkos and Women’s Shelter. At the same time, academic scholarships and special awards were awarded to students and staff who excelled during the academic year 2015-16.

Towards the end of the ceremony, graduates and staff of the College all took their places on stage for the group, commemorative photo with the graduates throwing their hats up in the air.

Distinguished members of the Economy, the State, Sports & Culture honoured with their presence the 37th Awards Ceremony of Mediterranean College.

You can see HERE the highlights of the 37th Graduation Awards Ceremony.

Previous
Education Festival – 140 free seminars become yours!
Next
Mediterranean College wins an Award for the best Presence on the Web, by Marketing Week.