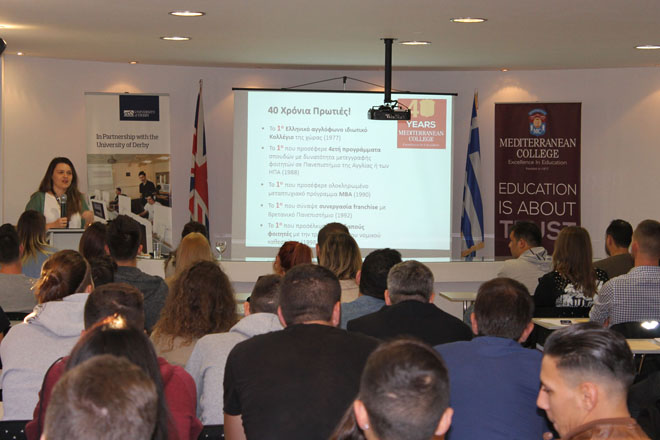 Mediterranean College (MC) -Orientation Days were held on 2nd and 3rd October 2017 at the college’s premises, both in Athens & Thessaloniki.

In Athens Orientation Days, new students were welcomed by Mrs. Katerina Xini, Managing Director of Mediterranean College, who presented the profile and philosophy of the 1st Private English-speaking College in Greece, as well as the college’s academic collaborations with Top British Universities and the basic structure of the British Educational System.

Mrs. Ioanna Karageorgi, Deputy Head of Academic Affairs, also gave her greetings to the students and informed them about all their educational benefits, the major college events and MC learning support services.

On October the 2nd, the Olympic and World Champion in Gymnastics, Mr. Dimosthenis Tampakos, addressed, as the key-note speaker, an encouraging speech to the new students, focusing on the basic concepts of Knowledge and Education, which are essential when achieving academic goals.

Mrs. Fotini Porichi, key-note speaker on October the 3rd, a Higher National Diploma of Counselling & Psychology graduate from Mediterranean Professional Studies and owner of Diploma in Personal & Executive Coaching Degree, certified by the International Federation of Coaching (ICF), gave emphasis on the importance of opening up new horizons in their future career.

The Key Note Speaker in Thessaloniki’s Orientation Days, Mr. Haris Dimitrakopoulos, founder of the INNOVAThess , spoke about the importance of networking in the market.

Greetings to the new students were given by the Academic Programme Leaders of Mediterranean College.

In the end, the new students made their acquaintances with MC graduates, who shared their optimum educational experiences during their studies at Mediterranean College.

Mediterranean College -Induction Week took place from the 4th until 6th October 2017, in order for the new students to familiarize with the basic content of their studies, as well as with the services provided by MC.